The Fields Medal: History, part I The obverse of the Fields Medal (Wikipedia)

Since 1936, medals have been given at every International Congress for Mathematicians, also known as ICM. Before the first medals were awarded, there were 9 ICMs held previously, with the first in 1897. John Charles Fields, the medal’s namesake, died before the first medal was awarded. Since the 1924 ICM in Toronto and until his death Fields worked towards the establishment of an ‘international medal for research in mathematics’. He was opposed to having the award named after any particular donor, including himself. Currently the award has a financial value of $15,000. 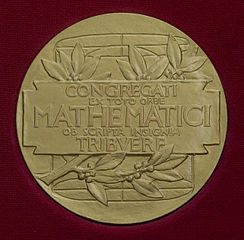 The reverse of the Fields Medal (Wikipedia)

6 Fields Medalists have received the medal for work related to the Langlands Program. This includes mathematicians Atle Selberg (1950), Alexander Grothendieck (1966), Edward Witten (1990), Vladimir Drinfeld (1990), Laurent Lafforgue (2002), and Ngo Bao Chau (2010). There are a few mathematicians that worked indirectly in the Langlands Program including Pierre Deligne (1978) and Sir Michael Atiyah (1966).

The international community of mathematicians, which is much more difficult to quantify, has been deeply interested in the work of these mathematicians. There are likely hundreds of professional mathematicians working on directions of research related to the Langlands Program.

Founder and Main Organizer for the Fields Undergraduate Network Will be using this blog on a regular basis
View all posts by cerezo →
This entry was posted in 2012 Symposium. Bookmark the permalink.